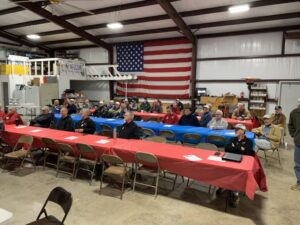 Pancake and Sausage Breakfast – About 49 breakfasts were served.  Special thanks to the breakfast crew for keeping up with the pace of customers.

Call to Order – Dick Keyt called the meeting to order promptly at 10:00.  61 attendees were counted in the hanger.  Dick introduced several guests.  A couple were candidates for office in Hood County.  Dick thanked them for their service to the community.  Brian Longwill moved into Pecan Plantation from the Phoenix area.  He is a retired airline and USAF pilot.

Safety – Don McDonald discussed some recent flights in his RV-10 where he let highly experienced pilots perform the takeoff.  Both situations involved questionable throttle application during takeoff.  They were unfamiliar with procedures or techniques unique to his airplane.  This reinforces the need to pre-brief anyone flying in your airplane whether they are a first-time flier or a high time pilot.

Fuel Flow Meter – A chapter member mentioned he had a fuel flow sensor that he no longer needed.

Aircraft Towing Tug – Dick Keyt mentioned a tug in the chapter hanger with an unknown owner.  Appears it is setup for Cessna nosewheels.

EAA Air Academy – John Bowen highlighted flyers on the tables with information seeking candidates for 2 scholarships funded by the chapter.  They will attend the first session which is held on the front end of Airventure, July 19-27.  This is a great opportunity for youth getting a start in aviation.  John requested that chapter members get the word out to candidates.  They are required to write a one-page essay.

Fly-Ins – Dick Keyt announced a decision from recent Board meeting to hold both a Spring and Fall Fly-in.  The Spring one will be held on May 7th and will be “Lite” version.  The Fall one is planned for the last Saturday in September and will have all the typical activities.  A Fly-In Coordinator needs to be identified ASAP.  Kliff Black noted the prior coordinators are available for guidance.

Secretary – Greg Walker requested that all chapter members pay their 2022 dues if they have not already done so.   Several dozen name tags are available for pickup.  Greg also recommended members make sure their profile information is up to date with contact information and airplanes owned or in construction.

Eagles Nest – Don Christiansen reported the aircraft build program at Granbury High School has high participation this year.  In the past they completed 3 RV-12s.  This year they are building a RANS S-21 with a tricycle landing gear and Continental Titan 340.  Don also noted the school has plans to build a hanger on the airport and recently purchased a 172.  Don noted there has been less involvement by chapter members as mentors and requested volunteers.

Featured Speaker – Following a short break, Colleen Keller Sterling joined over Zoom for her talk. Colleen is a pilot and aircraft owner who became involved in search and rescue for missing aircraft after working on the Steve Fossett search in 2007.  By day she is an Operations Research Analyst at Metron, Inc., a DoD consulting firm specializing in mathematical software applications to real-world problems.  She holds an advanced degree in Applied Physics. As a commercial, instrument rated general aviation pilot, Colleen has logged over 4000 hours in the past 30 years and owns a 1971 Cessna C-177RG (retractable gear Cessna Cardinal) and a 1990 Experimental Steen Skybolt sport biplane.  She is an A&P/IA and she teaches at the local community college as an Adjunct Professor in the Aviation Maintenance Program.   Colleen also moonlights with Savvy Aviation, running their Breakdown Assistance Program and collaborating with CEO Mike Busch and fellow A&P/IA Paul New on the monthly AOPA podcast “Ask the A&Ps”, a general aviation version of Car Talk. 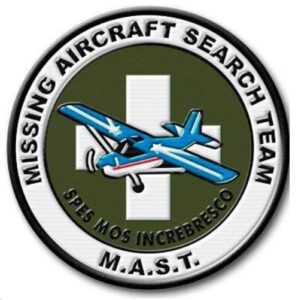 – Colleen is a founding member of the Missing Aircraft Search Team (MAST), a group of experts that takes on cold cases for missing aircraft. In her talk Colleen mentioned how she has a passion for solving these cold cases using probability and statistics methods.  She mentioned that other organizations take a more brute force approach to sector sweeping searches.  MAST uses Bayesian Search Theory to identify the highest probability search locations and prioritize search efforts.

Colleen reviewed the efforts and outcome of 4 Case Study searches;

Colleen said MAST has not participated in a major search effort in 5 or 6 years although members of the team have consulted individually.  Colleen responded to questions;