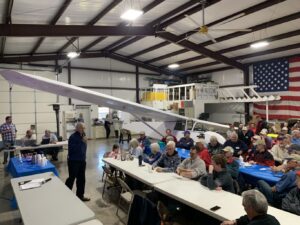 Record Turnout Since Pandemic! – 81 in attendance and 63 breakfasts were sold.  The breakfast crew did yeoman’s work keeping up with the demand for blueberry pancakes.

EAA Academy Scholarships – Two students are recipients of the 983 scholarships for 2022.  Austin Jenkins lives in Saginaw and recently soloed (before getting driver’s license).  Jay Seaman is the other recipient who has been attending Oshkosh since he was 3 years old.  He plans to solo in May on his 16th birthday.

Call to Order –Dick Keyt called the meeting to order at 10:00.  New member Richard Copeland introduced himself.  He has been a regular flier of the family J-5 and Citabria.  He currently works at Lockheed Martin and excited to join the chapter.

Project Reports – Don McDonald reported that John Goode conducted a first flight on his RV-10.  He explained how John was having difficulty pushing through finishing.  Don gave him a ride in his RV-10 speculating that might have helped motivate him through the finish line.

Dennis Finley reported that he recently completed his Twin Rating out of Parker County – Congrats!  He recently sold his Bonanza and may be in the market for a twin.  Dennis also warned the airspace between KWEA and KMWL has heavy training activity and to be on the lookout.

Keith Brown has a second RV-14 underway that was started by another builder.  He said it may become his new ride if it comes out better – otherwise, he will sell it!  Keith also offered a Safety Minute when dimpling skins with the C Frame tool.  An errant hammer swing resulted in striking the ring finger of his building partner and an ER visit – OUCH!

Fly-In – Dick Keyt announced some details on the 7 May Fly-in.

Secretary – Greg Walker is still collecting dues for 2022.  About 100 have paid so far with about 58 members from 2021 unpaid.  He received name tags for all who ordered them up through the last meeting.  Greg mentioned he and Kliff Black plan to revamp the Member Aircraft section.  Seeing member aircraft is an attraction for new member signups.  Initiating the effort is an article appearing in the February issue of Sport Aviation featuring Doug Crumrine’s RV-8.  Don Christiansen mentioned how an article about his S-21 was in the March Sport Aviation following a feature in his old EAA chapter Newsletter.  Greg requested members send him image files and text to host on the website.

Featured Speaker – Following a short break, our own Dick Keyt started out with a short history of gliders and sailplanes.  He followed that with a description of the chapter glider project and recent flight tests.

German glider pioneer Otto Lilienthal had the most success prior to the Wright brothers. He flew a series of gliders from 1891 until his death in an 1896 crash.  The Wrights improved on his designs by introducing 3 axis control via wing warping.  The Germans took glider concepts further by employing them in military operations having developed the DFS-230 with a 2600 lbs payload capacity.  One notable operation was the capture of a once thought impenetrable Fort Eben-Emael using the gliders to bypass moats and trenches landing on the roof of the fort.  In the US, the Waco CG-4 was the most prevalent troop/cargo military glider of World War II.  The CG-4A could carry 13 troops or cargo consisting of a Jeep or 75 mm howitzer (loaded through the upward-hinged nose section). Douglas C-47 was the typical tow aircraft.  Dick discussed several powered aircraft that became gliders when losing all power (Gimli Glider – 767, Air Transat A330, Corn Field Bomber F106, Miracle on the Hudson) and contrasted the glide ratios of common aircraft types.

Dick expressed appreciation to Mimi Andrews who donated the Schweizer SGS 2-22 Glider.  Dick led the team of chapter and student volunteers restoring the glider to flight status.  The glider recently conducted several solo and dual flights using Carl Keil’s Super Cub as tow plane.  Dick noted the chapter has 2 other glider projects ready for another team of volunteers. The SGS 2-22 will be based at Chigger Field in Cresson where the students will get some flight time and can pursue a glider rating.  Dick, 983 Volunteers, and Students – Thanks for your dedicated efforts!

Long time sailplane pilot Carl Keil trailered his Schemmp-Hirth Ventus 2B to the chapter hanger and demonstrated the setup which he said can be done all by himself.  This high performance sailplane has a wing span of 15 meters and glide ratio of 46:1. 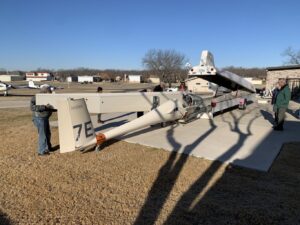 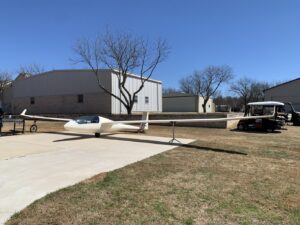