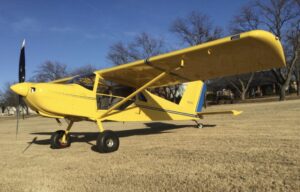 For many of us, we don’t have to guess who owns this airplane.  The Rans S-21 that Don Christiansen first flew last July has now exited the paint shop.  As he did for his RV-4, both RV-8s, and now the S-21, Don chose Poplawski in Ennis to put the color on his plane.  “Pop” has painted that scheme so many times I doubt there was even a discussion.  I imagine Don drops off the airplane with a note on the windshield, “Here is another one – Don.”

Poplawski is a well-known aircraft painter, and this is another example of his excellent work.

Congratulations Don on another good looking airplane!  What’s next?

I got the kit on 19 November 2019, and first-flight was on July 4th of 2020.  The plane has been to Johnson Creek Idaho and flew into and OUT of eight of back country airstrips (five unmaintained).  It is a bush lane that really will cruise at 150 mph true above 7500 feet while burning 9 gph with the Titan XIO 340 180 hp engine.  This is my sixth experimental aircraft. – Don Christiansen

One Reply to “Don Christiansen’s S-21 Gets Some Color”