Pancake, Sausage and Eggs Breakfast – For those of you who do not like pancakes, come for the eggs!  About 45 breakfasts were served.  Just before the meeting began at 10:00, we stepped outside and were treated to a Cougar Flight takeoff  and smoke ON pass.  They were staging for a Veteran’s Day flyover in Granbury. 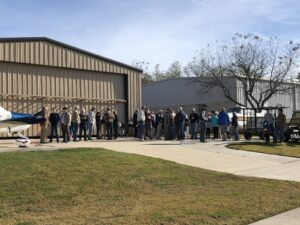 Safety – Mike Watson gave us a detailed account of his no-fun-at-all departure from The Landings runway 17 last summer.  The most recent work on the airplane (A-36 Bonanza, N67CW with 4800 hours airframe and 598 hours engine) had been to overhaul the boost pump and flow divider due to engine roughness at idle.  The airplane had been flown to Oshkosh and back since the fuel system work with no anomalies noted.

Glider Club – Carl Keil’s Super Cub is in the process of being fitted with a tow hitch.  Several mentors (Pat Hockett, Ray Lewis, Jordan Normark, Dick Keyt, and others) have been working hard with the kids to move the project along.

Officer/Director Elections – Thank you all for stepping up!  It’s official.  Kliff Black verified a quorum present, and by unanimous vote we have our elected leadership in place for 2022 through 2023.

Automatic Prop Balancer – Sam Tillman (Saber Manufacturing) is looking for volunteers to gather additional flight test data on a new device that will automatically balance your propeller.  It mounts in the stack either behind or in front of the spacer adding only 0.032″ to the stack up.  So, it will work on most airplanes without any modifications required.  Contact Sam at Saber for more info.

by Kip Lankenau from Kip Aero

Kip started out by talking about relative speeds around the time airplanes first flew to give us an idea of what a technological advance was taking place.  Bicycles and rollercoasters could go 10-15 mph and steam locomotives about 35 mph, while an early aeroplane screamed along at 40 to 60 mph.  Looking back, production quantities seem a pretty good indicator of the overall success of a design.  Pretty much all pre-WWI aeroplanes were prototypes, except for a limited number of designs by the Wright brothers, Curtiss, Bleriot and Bristol.  These early aircraft were really more like powered kites and construction materials often included bamboo.

The Wright Brothers airplane delivered to the US Army in 1907 needed about 10 hp minimum to stay airborne and was launched from a trolly with a deadweight.  It required a minimum ground crew of about 8 to 10 and rarely achieved more than 100 to 150 ft altitude.  A typical flight lasted about 15 minutes maximum.  It was a really big deal to fly as much as 30 to 40 minutes.

By the start of WWI, structures had evolved to mostly truss-type (e.g., the Bristol “Box Kite” with a 40 hp engine).  Early 2 or 3 cylinder automobile engines were adapted to aircraft by removing the flywheel which likely weighed 40 to 50 pounds.  This resulted in very high vibration.  Engine overheating was also a big problem.  In an attempt to solve these problem, Gnome developed the rotary design in which the crankshaft is fixed and the rest of the engine and prop rotates.  Classic Aero Machining in New Zealand is now building period-authentic, 7 cylinder new Gnome Monosoupape 100 hp engines that can be purchased through Kip Aero.  These engines turn at 800 to 1000 rpm with a 9 ft prop and were used on the Sopwith aeroplanes in WWI.  They run at two speeds – ON or OFF.  So power is controlled by “blipping” the ignition.  It’s not uncommon to foul one or two spark plugs (or lose that many plug wires) on a 30 to 40 minute flight.  The engine should not be run on the ground with a lot of blipping for more than a few seconds.

Controls were all over the place in these early aeroplanes.  The Wrights favored 2 levers with the LH side for elevator (included a handle to kill the engine), and the RH side for wing-warp and rudder mixed.  Twisting the handle could add more rudder.  Curtis used a wheel that controlled the elevator and rudder with a body harness to move ailerons when the pilot leaned.  But he kept changing rudder/aileron functions, since he could not decide what worked the best.

Before flight, these early airplanes had to be transported to the takeoff spot, pointed into the prevailing wind (no tailwheel and rudder typically ineffective until near takeoff speed), manually propped, and the engine blipped just long enough for the crew to get out of the way.  On the Gnome rotaries (and most other engines) the spark plugs, which were invented in 1902, had to be changed for every flight.  The ground crew had to manually pump air into the fuel tank for several minutes to pressurize it for flow to the engine.  And the pilot would have to remember to keep pumping every few minutes to maintain fuel pressure. 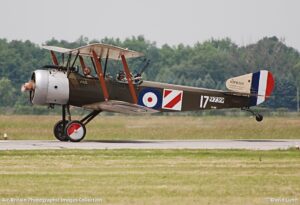 Kip Aero chose to replicate the Sopwith 1-½ Strutter in large part because over 5,400 were originally built – something indicative of a “successful” design.  Since it is a proven design, the kits are built to original plans with changes only for some more modern materials, to add very limited instruments (altimeter, fuel pressure, airspeed), and to add a wind-driven air pump for fuel tank pressurization.  Flying is done mostly by sight and sound.  Due in large part to the wasted oil system, it’s difficult to fly more than 30 to 40 minutes before being exhausted and unable to see clearly.  About 1-½ gallons per hour of castor oil spews through the engine.

Pilot reports (stuff actually written by pilots in the day who survived many flights) are essential to read and understand before flying any of these early aircraft.  Most early aeroplanes are actually fairly safe if operated within their limitations.  But limitations were not well-understood at the time.  For example, stalls were not at all understood until near the end of WWI.  Far more pilots were killed in training than in combat.  Early during WWI, pilots were often sent to the front with a total of 10 to 12 hours of training where they were then put in a type they had never flown before..  Early training aircraft did not have dual controls, so first solo was usually the first time the student actually manipulated all controls in anything other than a ground “simulator” known as a “rocking nacelle.”

Early WWI combat aircraft were transported to an Air Depot safely behind the front lines for assembly.  They would be assigned to a fresh group of newly minted pilots who were directed to then fly to a forward operations airfield that might be 7 to 10 miles away.  Out of a group of 6, it was not uncommon for only one pilot and airplane to arrive safe and ready for combat.  One might crash on takeoff, two might get lost (with one shot down over enemy lines), one might crash along the way, and one might crash on landing at the operations airfield.

In the movies, it all looks pretty glamorous.  I guess it may have been, for a few of those who lived to tell about it.