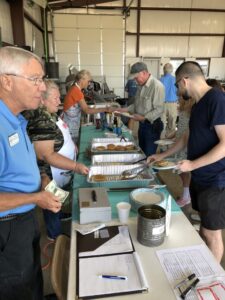 Pancake Breakfast – We counted 43 breakfasts served by our great group of volunteers lead by Val and Peggy Houston.  We even had scrambled eggs added to the menu!  We’re hoping to be able to include the eggs as an option at every breakfast going forward.

Dick Keyt called the meeting to order.  There were 50 members and guests present.  Steve Vargas brought our youngest new member (Rafael) who has been working on Saturdays with the Glider Club.  Welcome Steve and Rafael!  We also welcomed new member Jean Hart who got a ride in Dick Keyt’s PT at the non-Fly-In / Young Eagles Day event we held in late September.

Projects – Doug Greene is working on another One-Design.  He purchased the project for only $5,000 in large part to get the set of Flying Wires (valued at $3,000) that came with it.  First order of business for long, tall Doug is to extend the fuselage by 8 inches.  Joe Schell is, like many of us, waiting on parts to complete his engine rebuild.  Carl Keil has purchased a Super Cub which he intends to outfit as a tow plane for the Glider Club.  Thank you, Carl!!  And speaking of the Glider Club, Justis Lindsey gave us an update on painting which is in progress.

Since we did not have a guest speaker, Dick Keyt gave us a recount of his experience at the Reno Air Races last month.

Justin Meaders, who spoke at our November 2019 meeting, won in Formula 1 again.  If you ever need a little inspiration, just go read about Justin and what he has accomplished AFTER an injury that left him without the use of his legs.

In the Sport Class, there were 36 entrants vying for only 32 spaces in the time trials.  The fastest 8 move on the the Gold with the others sent to Silver, Bronze, and Medallion races.  The Gold race included 5 airplanes that had a legitimate chance to win.  Among them was Andrew Findlay who spoke at our January 2021 meeting.  Andrew won in 2018 and 2019, but was relegated to 3rd place this year after cutting a pylon.  His highly modified Lancair Legacy burns 60 to 65 gph and uses about 20 gallons of injection and spray cooling water/methanol mixture over an 8 to 9 minute race.  The highly modified Turbo Continental 550 (normally rated for 300 hp) makes about 850 to 900 hp in racing trim at 80 inches of boost.

Also flying in the Sport Class was Joe Coraggio.  He managed to garner 5th place in the Silver race with a stock Lancair Legacy.  Joe (aka Joey) was the first intern at Dick Keyt’s Polen Foundation when he was only 14 or 15 years old.  That was over 20 years ago!  He also spoke at one of our meetings a few years ago about his Long EZ build which includes highly modified wingtip vertical stabilizers.  He now flies for American Airlines.

Big Ass Fans – Contact Sam Butler for more details if you’re interested in a Big Ass fan similar to what we have installed in the chapter hangar.  He can fill you in on how to get a discount and more.

Merchandise – Michele Sonier is putting together a group-buy for Chart-It-All aprons at $35 each which will save on taxes and shipping.  She can also get coasters, and coffee mugs are in the works.  If you want a shirt, let her know.  We have the blue short-sleeve and black long-sleeve, and she is considering a white cotton shirt option as well as a fleece vest.  And we have chapter logo hats in stock for $10 each.  If you have other merch ideas, let her know.

Officer and Director Elections will be held at our November Meeting.  WE NEED SOMEONE TO STEP UP TO SERVE AS VICE PRESIDENT!  The slate of nominees (as of the posting of these minutes) is

Christmas Party – Tentatively set to be at the PPOA Clubhouse.  Due to staffing shortages, a sit-down dinner will not be possible.  The PPOA Club expects to be able to provide heavy hors d’oeuvres at a price tbd.  Failing this, we may be able to fall back on having a potluck at the Clubhouse.  And a hangar party might happen if the Clubhouse cannot be used.  Please be patient and remain flexible as our team of volunteer Christmas Party Planners scramble to make something happen in this post-COVID environment.

Spring Fly-In – We are seriously considering a Spring Fly-In, since the fall event had to be cancelled.  Stay tuned.  (For those who are wondering, EAA National asked that Chapters abide by local health authority directives/requests.  In late-August, the Hood County Medical Director requested events like the Fly-In should be cancelled.  In fairness to our food vendors, sponsors, and volunteers, we felt we could not wait until closer to the event to make the decision to cancel.)

“War” Stories – There were several pretty dang good ones.  Some may even be true!  In all seriousness, if you want to hear some pretty interesting (and often funny) stuff, as Lawrence Ryan about nuclear bomb testing, or Dick Stultz about his tour as a submarine captain, or Bob Butt about a nuclear aircraft carrier, or Dick Keyt about what happened to an unruly passenger on an Atlantic crossing not long after 9/11.