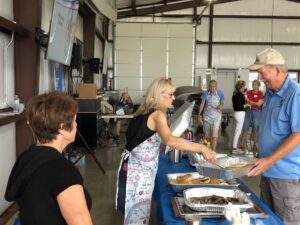 Pancake Breakfast – We counted 66 breakfasts sold and served by a great crew who started early, stayed late, and had fun doing it all.

Dick Keyt called the meeting to order and introduced several guest and new members.  The meeting was very well attended by 88 members and guests.  And there were several who flew in.

Projects – Jimmy De La Garza provided an update on his scope-creep, … er, uh Musketeer project.  Things began with a balky starter.  This led to finding the engine really needed some top end work.  But that uncovered a badly worn camshaft, so he wound up fixing the balky starter by simply rebuilding the engine.  Sounds like one of my projects.  Of course, brake repairs were in order, since the only way to access parts of the brake system are by removing the firewall (the Musketeer has a removable firewall!!), and that’s made pretty easy by removing the engine mount, which of course is easy to do when the engine has been removed to fix a starter.  Since the firewall removal gives ready access to the back of the instrument panel, sprucing up the panel wiring was in order.  Nah.  One simply cannot rewire such an old panel.  Replace it!  And a new panel requires a new interior, else it would simply look out of place.  It IS like one of my projects!  Jimmy says he lost 35 lbs in the process.  I think that was on the Musketeer.  He also talked about some of the really cool CAD/CAM tools used in the process, and we’re going to plan to have him back to tell us more in the near future.

Fly-In Planning – The annual Pecan Plantation Fly-In and Car Show will be the weekend of 25-26 September. Sign up early and often to help out!  AnnElise is working on arranging food trucks to reduce our workload.  We will need all hands on deck to set things up on Friday, 24 September.  We’re planning a Saturday night Potluck like we had in 2019 that was so well-received and attended.  There will be a silent auction fund-raiser, and we hope to have flight simulators for the kids along with LOTS of Young Eagle flights on Saturday.

Christmas Party – Save the 2nd Saturday, 11 December.  Possibly at the Clubhouse, but other venues are being explored.  The PAC does not allow parties like this.  A hangar potluck is a possible fall-back option, but that will detract from the a semi-formal setting and there may be significant issues with parking.  We are going to ask everyone interested to sign up and pay $50 each by our August meeting in order to get a better feel for planning and to secure a venue.

Office and Director Elections – Dick Keyt called for anyone interested to join the nominating committee, and he also appointed all current Offices and Directors to the Committee.  If you are interested in serving, please step up!  FYI:  I will be stepping back from my role as the Chapter Secretary.  And I would love to hand off the Webmaster job as well, if anyone is interested in taking it on.

Lancair 320/360 Project – We need a lead for the final build and assembly!  This could be a great “community” project and might also involve the Glider Club youth to the extent our project lead feels it is appropriate. 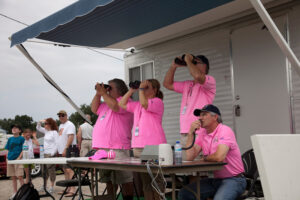 Charlotte served as a “Pink Shirt” at Oshkosh from 2005 thru 2015.  She noted that 3 new waypoints have been added ahead of RIPON.  If you’re thinking about flying into Oshkosh, even if you’ve done it before, GET THE NOTAM AND STUDY IT!

Charlotte provided a lot of very good information from an experienced controller’s perspective, and the video of her presentation is well worth the watch.  You can find the entire meeting on our Facebook page here:  Flying Into Oshkosh

Scroll to the 1:09:00 mark in the video to hear what Charlotte had to say.