Dick Keyt called the meeting to order and introduced guests and new members.  This was another hybrid in-person/virtual meeting.  I counted 52 at the hangar and 7 online for 59 total attendees.

Safety Minute – Dick Keyt and Michele Sonier recounted their recent experience with a pair of wayward pilots (including a flight instructor) who were traveling through the area on a trip from Oregon to Florida.  Several chapter members have been involved to help out, and the airplane is still grounded here at Pecan awaiting parts needed for repairs.  While everyone is OK, neglected starter switch maintenance and a series of questionable piloting decisions (get-there-itis?) could easily have led to an accident.

Membership renewals for 2021 stood at 94 at the start of the meeting.  Please re-up asap!  Thanks

Young Eagles Lead – As previously noted, we need someone to step up and fill Karen Woodward’s shoes.  Don’t wait!  Give Karen a call and find out how you can help keep this important aspect of our Chapter alive and well.

Merchandise – Contact Michele Sonier if you want one of our chapter logo shirts – or a vest – or coffee mug – or hat – or…. 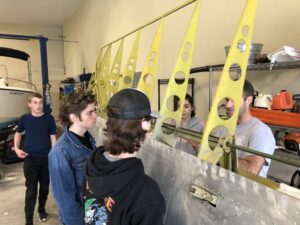 Dick Keyt and several of the young-adults who have been involved in restoring the Schweizer SGU 2-22 presented an update on the glider project.  The project has attracted quite a team of mentors and youth who started serious work on the project in November.  At the risk of leaving someone out,

It was nothing short of inspiring to hear what these young folks had to say about the project and what they are learning!  They’ve been hands-on in every aspect of the work including cleaning, sanding, sandblasting parts, milling, welding, lathe operating, priming, painting, pressing bearings, tool-making, …  The list goes on.  Many are aspiring pilots – others aspiring engineers – some are both

[By the way, I dropped by the glider workshop today after our Chapter meeting, and it was a beehive of activity!]

Jordan Normark came through with a solution to the first big problem the group needed to solve.  That is, a place to do the work!  Jordan (9611 Taxiway) has made part of his hangar and pretty much all of his attached workshop available.

Next big hurdle?  Where to base and fly out of.  Pecan Plantation is far from ideal, especially for training, since there are few close by areas available to safely land out if necessary.  Solution?  Rich Richbourg has generously offered hangar space and use of his private airfield (Chigger – TE52) located just south of Bourland.  Chigger has a 3050 x 200 ft grass strip and is surrounded by plenty of open space around it.

Tow Plane anyone?  This is pending a good solution.  If you any ideas…  First flight is expected by late-spring or early-summer. 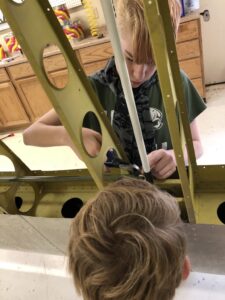 The Brazos River Glider Club – The team were going down the path of setting up a new legal entity to own and operate the glider, since EAA chapters are prohibited from operating an aircraft.  But after meeting with the Chapter Officers and Directors last week, it was agreed that the Polen Foundation – which is already actively supporting the project in its mission as a non-profit educational foundation – offers an ideal way to move forward.  The project fits perfectly with the mission and purpose of both our Chapter 983 and the Polen Foundation.  Without objection, the Chapter will move forward with transferring the glider to the Polen Foundation.

Fundraising – An important objective of the glider project mentors has been to enable youth participation at the lowest possible cost to them.  They have been able to largely accomplish this goal through donations from mentors, local vendors, and others.  Chris Jaeckle has been looking into grants from industry and government and asks everyone to let her know if you have any contacts she might reach out to.  The near-term need for parts and supplies is about $3,000 of which about $1,500 has been raised so far.  To this end, the Chapter Officers and Directors have voted to donate $1,500 on behalf of Justis Lindsay who was our 2020/2021 EAA Academy Scholar and did not get to attend due to COVID-19.  Without objection, the Chapter will move forward with making this donation toward the project in the next few weeks.

Get Involved!  The Glider Club meets at Jordan Normark’s hangar every Saturday from 9:00am to mid-afternoon.  They need our continued support to be successful.