Another Great Turnout – 72 in attendance and 55 breakfasts were sold.  The breakfast crew was in the hanger before first light and had pancakes, sausage, and scrambled eggs ready for the first customers at 8:30.

Call to Order – Dick Keyt called the meeting to order and introduced several guests who either live in the area or are new to Pecan Plantation.  Bruce and Geneva McJunkin who moved to Texas from Fresno, CA.  Were previously members of EAA Chapters 1 in Flabob and 376 in Fresno where they lead the Young Eagles program for 14 years.  They are in the process of buying Mark Holliday’s home.  Jill and Piper from Boyd who own a 1946 Piper J-3.  Piper got her first Young Eagles flight at the recent chapter event.  Hendrick who has acquired tools from Dick’s company to remove ruddervators from his 1950 V-35B.  Cody Blair and Valerie who are interested in building an RV.  Cody flew Medevac for 12 years and currently flies 767s for ATLAS.  Valerie is an RN who specializes in training trauma nurses.  Sparky Barnes, friend of Mark Holliday, is an aviation writer.  Craig Parks from Stephenville who bought a Cessna C172K to get the hanger space and also owns a Cherokee 6.  He recently flew the Cherokee 6 to the Bahamas and highly recommends it.

Treasurer Report – Bill Eslick reported that the chapter has approximately $25K in the account after the transactions with the Brazos Bunch Property LLC.  He deferred to Kliff Black for a more comprehensive accounting and explanation of the LLC.  Kliff went through a series of charts explaining how the chapter interacts with the LLC.  He has heard of some misinformation being spread around Pecan and asked that any questions be directed to him for the real truth.  The chapter owes a debt of gratitude to the LLC investors as they are donating any appreciation in property value to the chapter.  Kliff’s presentation can be found at Chapter Governance and Facilities – Chapter 983 (eaa983.org)

While still on stage, Bill Eslick reported that the Fly In committee has started organizing and set the date for September 23rd with a rain date of September 30th.  He passed around a list of committees and volunteer signup opportunities.  Many of the lead positions have been filled but a couple key positions remain open.

Secretary Report – Greg Walker reported the Chapter Renewal was submitted to EAA National in December.  This information is used as a basis for Chapter Recognition.  Greg is hopeful we can move up from Bronze based on accomplishments this year.  He recently cleaned up the membership roster deleting several members who are not current on dues.  Membership dues is being collected for the coming year.  It can be done through cash, check, or Paypal on the chapter website.

Safety Minute – Charlie Kearns informed the membership of his experience getting his A36 Bonanza painted and some close calls on flight readiness.  Following the paint work the aircraft panels and fairings were reinstalled by the shop.  Despite some objection, Charlie insisted on some gear swings to verify proper gear retraction and extension.  The retraction went as expected but the extension was accompanied by a banging sound.  After some adjustment on the nose gear door, the landing gear extension worked properly.  In flight Charlie noticed the pitch control was not as smooth.  Turns out the elevators were rubbing due to a cotter pin not being trimmed properly.  There was also a protruding bolt that could be a source of interference.  Charlie emphasized how important it is to do your own close inspection and operational checks following what could be misconstrued as a minimal maintenance activity.

Young Eagles – John Bowen reported of a very successful Young Eagles event held on January 9th.  It was originally intended as a private event for the Bosque County Homeschool kids but due to limited signups, the event was opened up to all youth.  27 kids were flown by 6 pilots between 10:00 and 1:00.  Bob Pastusek and Bob Moreau added a new aspect to the program by giving aviation presentations to the parents and kids at 11:00 and noon. The presentations included a walk-around of the aircraft & helicopter, explaining aircraft structures, theory of flight and aviation careers.  Another Young Eagles event is planned for March.  The chapter will get double credits for flights through July 31st.

John wanted to remind members of the opportunity for a youth 16-18 years old to attend EAA Air Academy Camp this summer.  The chapter was only given one slot this year and he needs applications to be submitted by February 1st.  More information is available on the 983 website posting. 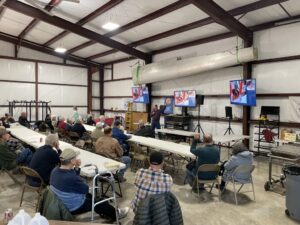 Featured Speaker – Following a short break, Neal Goodfriend took the stage to highlight nearly 2 decades worth of restoration on a Waco VKS-7F.  He explained how he and Doug Crumrine filled their time over the Atlantic Ocean talking about the Waco and Doug’s RV-8.  Neal previously built a Smith Miniplane from plans and has restored a number of aircraft (many during the Waco restoration).  He related how the restoration was endured with 3 different dogs and one wife!  His one year old toddler when the project arrived eventually did the final torquing of the prop bolts 19 years later.  The material Neal presented was given to the Waco Club at Airventure 2021.

This particular Waco was originally purchased in October 1942 by Purdue University for flight training but was soon transferred to Defense Plant Corporation in Washington DC in support of Civil Pilot Training for WWII.  The aircraft was damaged in a fuel exhaustion crash into a California peach grove.  NC31674 exchanged hands many times after WWII with a couple restoration attempts until finally landing in Neal’s hands in August 2000.  Neal explained how this restoration was not completely authentic, so it falls under the Custom Antique judging criteria at AirVenture.  He chose to modernize several aspects to make it a safer aircraft.  One of the significant changes was replacement of the original 240 HP Continental with a 275 HP Jacobs which is much more supportable.  20 of this model Waco were built and only 4 are still airworthy.

Since this model went through a limited production run there was very little tooling used in the original part production.  Many parts were handmade from templates.  As part of the restoration Neal replaced nearly all of the wood structure except for a couple doors.  The original wood construction used Resorcinol glue for bonding.  Neal was able to get a field approval for epoxy glue as substitute.  The steel structure avoided drilled holes which is a source for water infiltration and eventual corrosion.  In many places attachments were made use lacing cord or safety wire.  One very impressive part of the restoration was building a new instrument panel using a hydro dipping technique that looks like Burl wood.  It required many trial and error iterations. 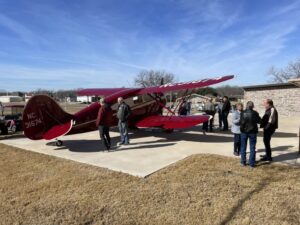 He obtained a full set of blueprints for this Waco model from the Smithsonian.  One surprising aspect was he received originals when he was the first requester.  The Smithsonian archives the microfiche of the drawing.

Neal flew the Waco to Pecan and parked it in front of the chapter hanger.  It was an impressive sight and no wonder it received the Bronze Lindy for Custom Antique at Airventure 2021.  His commitment to the restoration is very impressive.