Great Turnout on a Cold Morning – 58 in attendance and 52 breakfasts were sold.  The gas heaters and cooking apparatus kept the hanger warm as stacks of pancakes, sausage, and scrambled eggs were getting cranked out for the breakfast customers.

Call to Order – Dick Keyt called the meeting to order with a short set of reports before assembling the audience outside for the formation flyover.  He introduced several guests who either live in the area or are new to Pecan Plantation.

Dick reported that Jared Latimer informed him that he will be unable to serve as VP in 2023.  Since this is a 2-year term and elections will not be held this year, we are in need of someone to take over the VP position.  Dick explained that typically the VP is in charge of lining up the monthly speakers.  In years past the VP was also the Fly In Chairperson but that is changing for the upcoming year and will no longer be a responsibility.  Dick said he is looking for volunteers but is ready to start “twisting some arms” if no one steps up. 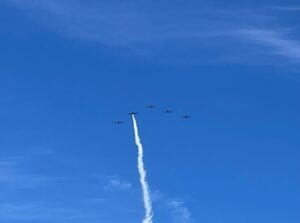 Missing Man Formation – A formation of 5 RVs took off from 0TX1, executed a precision V formation with one RV peeling off, and ascending to heaven in honor of our departed veterans.

Secretary Report – Greg Walker had several reminders for the membership.

Christmas Party – Members should have received an invitation through email for the Christmas Party on December 10th.  The organizers of the party, Claudia Sutter and Konnie Sasser, have requested a deadline of November 19th to receive payment, table requests, and food selection.  It should be a fun and festive affair with music and dancing provided by our own Jimmy De La Garza.  Get your reservation now!

Featured Speaker – Following a short break, Dave Anders presented his experiences flying and improving his Van’s RV-4 for 30 years.  He brought his RV-4 with his wife Diane from the Phoenix area flying nonstop in less than 4 hours using less than 22 gallons of 100LL.  His RV-4 was on display in the EAA hanger during his talk.

Dave’s vocation was as a dentist-his “passion” has been to make his airplane more efficient.  He was not trained as an engineer, but he studied published reports and put the data into service in a scientific manner.  Dave has kept records of his performance before and after making a modification and can show you the benefit of each mod.

Dave has spent 30 years attacking the main contributors to aircraft performance; Drag, Engine Thrust, and Weight.  He emphasized it is difficult to assign an absolute improvement metric to any individual change because it depends on the order of those changes.  His RV-4 started out in 1992 with a stock IO-360 producing 195 HP and max speed of 220 mph.  By the time he completed all the mods his HP increased to 235 and max speed of 264 mph.  In 1997 he became the CAFE Triaviathon World Record holder that has yet to be beaten.  His average rate of climb from 2500′ to 3500′ was over 3300 FPM! 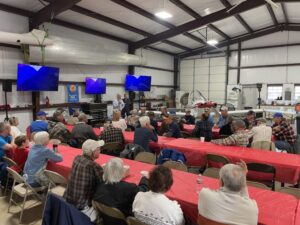 He pointed out that cooling drag is often neglected, which can be up to 46% of the aircraft total drag.  Using a plenum in cowl allows all the air to be captured and directed toward cooling as opposed to be leaking out openings.  A proper plenum design will reduce the velocity to 35 mph and maximize the delta P across the cylinders.  The most influential improvements to external drag were the fastback canopy, two piece pressure recovery wheelpants, and closing gaps/seams.  Dave gained thrust performance by running RPM up to 2950, thinner-more efficient propellor, and electronic ignition pushing to 39 degree advance timing.  Weight was reduced in several places including the pilot!

Dave left us his aircraft performance paper that documents each improvement along with pictures of the modification.  The file is quite large, so get with Dick Keyt or Greg Walker to get a copy.  He considers it to be public domain.  His dedication to this lifelong obsession is very impressive and we were very fortunate to hear the story in person.