Great Turnout During Sun N Fun Week – 71 in attendance and 57 breakfasts were sold.  Although a big line formed for the pancake and scrambled eggs breakfast, all were served in timely fashion.  Another outstanding effort by the breakfast crew.

Call to Order – Dick Keyt called the meeting to order at 10:00.  There was an encouraging large number of guests in attendance.  Dick let each guest say a few words about their aviation career and future plans. Bobby Easley who is taking flying lessons at Granbury Muni and getting close to solo.  Paris Hollis former Air Force pilot recently moved to Pecan Airpark.  Jim Huselman who owns a Cessna Cardinal.  Dick Curtis a long-time homebuilder.  Erik Charlton and Jonah Powers who are early career engineers at Lockheed Martin and interested in homebuilding.

Project Reports – Dick highlighted a major accomplishment by Michele Sonier getting her type rating in a Cessna Citation XLS.  She has now reached over 1500 hours of flight time.

Dick reintroduced Dave Boldenow a past member of the chapter who has a very interesting career journey at Scaled Composites, Boeing, LM, and others.  He is planning to retire from LM this month.

Dick discussed the recent events with the glider project.  After several successful tows the towplane experienced excessively high CHTs and was determined to be in need of an overhaul.  While this is underway the glider club is looking into a car tow launch system at the Chigger Field location.  Typically this requires a 3000’ strip and 1500’ rope for the tow.  Due to tight runways constraints and limited altitude releases the club is investigating a reverse tow system using a pulley that requires half the distance for launch.

A club member’s Lancair recently had an engine mount break.  Instead of installing the same design engine mount the existing mount was repaired and reinforced for more durability. 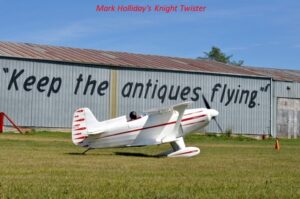 Mark Holliday reported on progress recovering a Knight Twister, 40’s vintage single seat biplane with a 15 foot wing span. He is replacing the cotton fabric that was put on in 1967.

Young Eagles – John Bowen discussed the need for ground crew and pilot volunteers during the fly-in.  All volunteers need to be registered with Young Eagles @ YEDay.org.  If updated background checks or youth protection training are needed please complete 10 days ahead of time to make sure it is recorded in the member EAA profile (see https://www.eaa.org/en/eaa/training/background-check).  He noted that Young Eagles are limited in age from 8 to 17, however, Eagle Flights are available for ages 18 and up.  EAA is making a big push on Eagle Flights to be more instructional.

Fly-In – Dick Keyt reported planning is continuing and the coordinators from each aspect of the fly-in will be reaching out to members for help.  Please support if asked.  There will be no monthly meeting in May.

Secretary – Greg Walker is still collecting dues for 2022.  About 125 have paid so far with about 32 members from 2021 unpaid.  Although a number of nametags have been picked up there are still several ready.  Greg reiterated last month’s request to send pictures and text for the enhanced Member Aircraft Section on the website.  Some of today’s visitors mentioned reviewing that section of the website in preparation for their attendance.

Featured Speaker – Following a short break, Dick introduced Jared Calvert who is the Ranger Airfield Manager.  Jared started off by recognizing Chapter 983 as one of the best in country for the active members and diversity of aircraft. 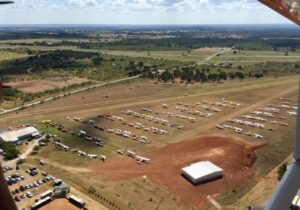 Ranger Airfield had its beginnings as early as 1911 when it was a stopping point for coast-to-coast flights in Wright Model B flyers.  Cal Rogers and Robert Fowler performed the flights for a $50K William Randolph Hurst prize.

A major restoration project is underway on a Jenny JN-4D to flight status.  Very few of these aircraft survived post WWI.  It contains 230 turnbuckles and 107 wires on the outside, illustrating how complex this aircraft is.  Jared promises to fly it into Pecan when complete.

Another major project is the restoration of a tower and beacon that was used during the postal service cross country flights.  These beacons were situated every 10 miles along the route. Jared was able to acquire a 24” beacon like the original.

Today Ranger Airfield is maintained by the Ranger Airfield Foundation (RAF).  They hold a yearly air show in October that has attracted over 200+ aircraft.  A youth program is being launched for about 40 kids from the local school to learn about aviation. They will also be sponsoring private pilot instruction.  Ranger Airfield is also offering hanger lots for sale that will be highly restrictive to maintain the vintage look of the airfield.

Although not mentioned in the meeting, RAF will be auctioning off a Piper J-3 Cub Restored by Legend Aircraft in 2013.  You can visit this link to donate.  Piper Cub Raffle | Raffle Creator 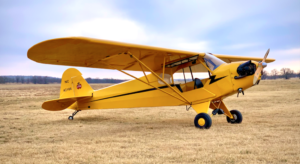