Pancake, Eggs, and Sausage Breakfast – About 47 breakfasts were served.  Special thanks to the breakfast crew for keeping up with the pace of customers. 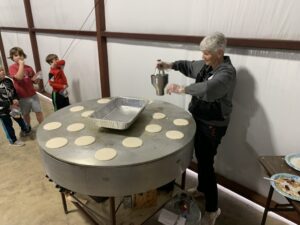 Call to Order – Dick Keyt called the meeting to order at 10:00.  62 attendees were counted in the hanger.  New member Carl Behrent introduced himself.  He is a retired AA pilots and owns a V tail Bonanza.  Also attending was Jake Seaman who is applying for the 2022 EAA Air Academy spot from the chapter.

Gone West – Steve Bloomquist mentioned the passing of long time 983 member, Willard Edwards.  The funeral services were to be performed later in the day.

Chapter Awards – Awards are presented each year to members who go above and beyond in service to the chapter.

Safety – Doug Crumrine mentioned an incident with a buzzard over the Pecan runway.  He had still and video footage of the encounter.  Although feathers flew, there was no damage to his RV-8.

Project Updates – John Bowen mentioned they are about 2 weeks away from getting their 1956 G35 Bonanza back in the air.  They have been troubleshooting the calibration on the electric prop.  Static RPM is a little too high.

Fly-In – Dick Keyt announced a Fly-In Coordinator has yet to be identified.  The Fly-In will occur on May 7th.

Secretary – Greg Walker mentioned he is getting trained up on Kliff Black’s membership tracking system.  He requested that all chapter members pay their 2022 dues if they have not already done so.   Several dozen name tags are available for pickup.  Greg will be submitting an order for a batch of nametags for delivery at the next meeting.

Featured Speaker – Following a short break, Doug Crumrine introduced Chuck Barth from Tarragon Aircraft.  Chuck is a close friend of Doug’s and served in the USAF with him as a Joint Tactical Air Controller (JTAC).  The chapter hanger door was opened and the aircraft rolled in as the centerpiece for Chuck’s presentation.  He flew N70RR in from Pekin, IL. 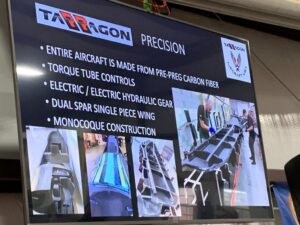 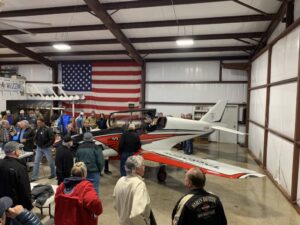 Chuck described how his work in Latvia setting up their JTAC program led him to discover this aircraft being developed nearby.  He used a bottle of bourbon to convince them to show him the aircraft.  The original design was based on the Millenium Master designed by the University of Turin and Alenia.  They improved the design by making it longer, wider, and beefing up the landing gear.  The entire aircraft structure is made of prepreg carbon fiber with an amazing empty weight of 727 lbs.  It is stressed for +4/-2 g’s, has a GRS recovery parachute, and a camera in the tail to view the landing gear position.  The seating is fighter-like with dual controls and upholstery like a sports car.  Chuck was amazed how well it performed on such a small powerplant (Turbocharged Rotax 914).  He did his first flights on a 1600’ x 25’ runway.  It was able to takeoff and land in about half the runway distance. A fully equipped one is in the upper $300K range.  Chuck is the US sales representative (sales@tarragonaircraftusa.com).  For more information go to the Tarragon Aircraft website.  Ultralight | Tarragon Aircraft | Rīga