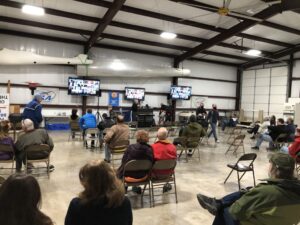 Our first ever “hybrid” meeting.  I don’t know how it was for those of you in “virtual” land, but things worked out GREAT inside the hangar!  A big thank you to AnnElise Bennett, Jared Latimer, and all the others (sorry, I don’t have a full list) who helped put everything together.  Hybrid meetings are most certainly a challenge, and we had a team who stepped up to meet it.  Hopefully, we will not have to keep doing things this way for too much longer.  This was our first official Chapter meeting since last February.  I’m looking forward to the day we can omit the virtual part and reopen our Pancake Breakfasts, too.

I counted 36 brave (or depending on how you look at it, perhaps foolish) souls who attended in person.  At least 5 were either new members or visitors.  Plus we had 25 attend via Zoom and at least 3 on our Facebook feed for a total of about 61 to 64 members and visitors.  Jared ran the audio/visual, and from where I sat it was just about perfect.  I hope everyone who attended via Zoom had a similar experience.

Safety Minute – Dick Keyt spoke on a couple of topics related to our aging aircraft.  He recently experienced a main wheel hub crack on his Bonanza.  He noticed something was not right at slow taxi due to the wheel rubbing the brake.  Other than the crack that extended from the outer edge and about halfway around the hub, the unit appeared to be in very good condition.  I expected to see evidence of fatigue where the crack started, but could not find with the naked eye.

The De La Garza’s airplane is getting a rebuilt engine.  While the engine was running smooth with no signs of metal in the oil filter and normal RPM drops on mag checks, it just didn’t seem to be making rated power.  On inspection, it was discovered that one of the exhaust valves was opening to only about ⅓ of specification.  Teardown found a severely worn cam lobe and follower.  How could they have better known whether the engine was making rated power?  The answer, with a fixed-pitch prop, is by checking full-power static RPM.

I will be looking back at early data for my RV-7 to find what it did then and compare it with what I get now as I begin a takeoff roll.  I was also reminded to always crosscheck “airspeed alive” when I saw a Bonanza abort takeoff earlier this week due to a pitot cover that had not been removed.

Membership Status and Renewals – Many of you have already re-upped online.  Thanks!  Watch for your reminder email.  Or, why wait?  LOGIN HERE and click the Renew Subscription link to use PayPal.  Or mail us a check.  Or better yet, come to the next meeting and re-up in person!  As of this morning, we have 49 paid up voting members.  We finished 2020 with 153 regular members which included 20 new members and was one shy of the 154 we had at the end of 2019.  Our email list includes a total of 252 active subscribers. 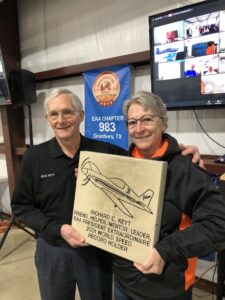 Make it “Keyt Right” – AnnElise, with help from Jared and many others, put together an awesome surprise award to recognize Dick and thank him for all he has done, and continues to do, for our Chapter, local community, and aviation community.  You really need to watch this VIDEO.  Dick was also presented with a “brick” to be placed at the Plane View Park flagpole.  And, we were treated to a 4-ship Bonanza formation flyover.  Those in attendance included Joe Corragio (made it here from Phoenix, I was told).  Joe was one of Dick’s first interns and one of many who have gone on to successful aviation careers.  It was all pretty special and an honor most deserved for our leader, friend, and generous mentor to so many.

This presentation is well worth the watch, but if you don’t have time, below is a quick digest.  Andy says that he grew up going to Reno and even met his wife there.  He is a truly great ambassador for the Reno Air Races and general aviation overall.

Andy’s highly modified Lancair Legacy AVERAGED a little under 400 mph and has been clocked at 425 mph on the course at Reno.  WOW!  They don’t really know just how fast this thing will go in a straight line, but intend to find out this year.  The airplane weighs about 1750# empty and 2200# at race takeoff.  They pull about 2-½ to 3 G in racing turns, but have seen -1 to +5 G due to turbulence during a race.