Richard McSpadden wrote an article in the February 2020 edition of AOPA Pilot in which he illustrates how difficult it is for the human animal to objectively look at and digest ALL information available during times of stress.

His case in point was the crash of a Beech Debonair from fuel exhaustion when there was fuel onboard.  The fuel gauges on that aircraft are selectable between Main or Aux tanks. In the accident aircraft they were selected to read the Main tanks, however the fuel selector was positioned to the Aux tanks. You begin to see the thought process at play.  In his mind the pilot checked the fuel quantity and that wasn’t the problem.

The engine began running rough at 7000′ MSL.  The pilot reported he had time to check the engine instruments, attempt a restart, make a “Mayday” call, turn towards an airport.  When reaching the airport became impossible, he decide that a logging road was the better option.  The article doesn’t state how much time elapsed between the engine running rough and the landing, but one can assume several minutes passed.

McSpadden makes no judgements about the pilot’s actions but instead focuses on a common foible of us all when it comes to dealing with stress.  We can look at a situation, make an assessment and decide on a course of action.  Because we expect those actions will result in success it then takes a large stick and a clubbing about the head and shoulders to make us reevaluate.  It’s called “Expectation Bias or Selective Attention.”  We see/hear/smell what we expect regardless of what is actually before us.

Before reading any further, it may be instructive to take a look at this short YouTube video:  Selective Attention Video

OK.  If you’ve not seen the video, it is a group tossing basketballs around the room.  At the end you are asked if you saw the gorilla.  No?  That’s Expectation Bias.  You were expecting to see people tossing a ball around the room but darn sure don’t expect a gorilla to be there.  Until you watch it again and there he is!  How could you possibly miss that?

In another aviation occurrence a single engine aircraft’s engine began running very badly.  When the pilot reduced power it began running well enough (still poorly) to reach to the nearest field which was about 15 minutes away.  Moving the throttle and the resultant improvement suggested that the throttle position affected the problem, and the expectation was that the engine would continue to run all the way to the field.  After about ten minutes the pilot thought to cycle through the mags and Voila! Bad mag.  Now running fine he continued to the airport and landed uneventfully.  Happy ending to be sure but it’s not unreasonable to imagine that the mag might have continued to deteriorate or continued operation might have damaged the engine internally and caused an off airport landing.

This all too human response pops up whether you are shooting an approach, spraying soybeans, or dropping a bomb.  Professional aviators train constantly to counter it.  Decades of experience has shown that committing to memory a small list of items and, when required, completing that list in its entirety is the answer.  Call them Bold Face, Quick Reference, or Immediate Action items.  The idea is the same.  When a problem arises, fly the airplane, complete the list, then troubleshoot if there’s time.

Now the point of this article is not to rehash McSpadden but to offer a course of action that relates directly to our GA kind of flying.  When I provide a flight review there is the obligatory “engine failure/rough running” scenario.  In our airplanes, when there is an engine problem, most POH’s list the same big ticket actions.  Switch fuel tanks, move the mixture rich, boost pump on, cycle through the mags and turn on carb heat (carbureted) or open the alternate air (injected).  Sitting here at the computer that’s easy to remember.  But I would have trouble reciting them while turning the plane towards a landing spot, answering my passengers LOUD requests for info, and trying to release my posterior grip on the seat cushion. 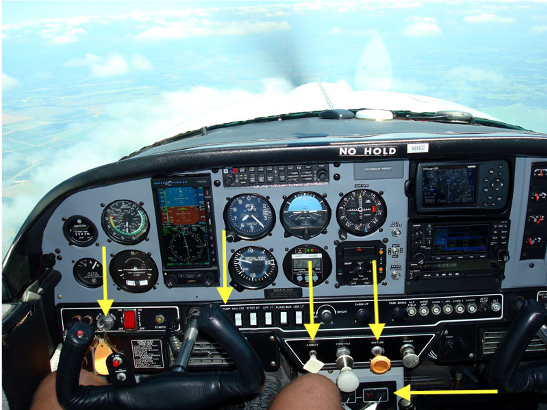 During the reviews I like to suggest that the pilot design an “Alphabet” response to a rough or not running engine. On the ground, sit in the seat with the POH and design a flow that covers the Bold Face items in linear order.  You’ll find that you can almost always relate that flow to a letter.  In my Bonanza, it’s an “n“. Fuel selector on the floor by my left foot, directly above are the mags, horizontally across the panel to the aux pump, then down to the mixture and alternate air.  Chapter 983 member Brenda Staples’ Grumman Cheetah lends itself to a “lazy L” (that’s Texas livestock brand lingo).  On the left side of the sub-panel are the mag switches, horizontally across to the boost pump, carb heat and mixture then down to the fuel selector.

The point is, when you are up to your eyeballs in alligators, all you have to remember is your letter and it will lead you to the items.  Practicing the letter check is also engaging and easy to remember.  When you look out the window and say to yourself, “If I had to land now …” that’s an excellent time to spend the 10 or 15 seconds it takes to run through those items.

So… if one day you are unfortunate enough to have to use your alphabet selection, you can comfortably accomplish each item and then spend the rest of your time flying the airplane.  At the very least, later on while standing around the hangar, you won’t have to explain to your friends why you didn’t see the gorilla.