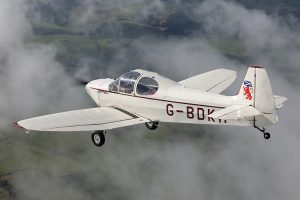 I am looking for someone that might take on my late fathers project.  You may have known him or know of him, he was George E. Beal, Jr.. He was very active in the EAA  and the Experimental Aircraft world.  I think he was a founding member of EAA Chapter 914, Greenville, TX.

I was going to try to finish the Piel Emeraude that he had worked on for years but have decided to try to find a new home for it as I don’t have any space in which  to work on it and do not see that I will have in the foreseeable future.  I have the complete plans set to include his three-piece wing design which was approved by Claude Piel.  The parts that I have are in storage in Joshua, TX.  This consist of a nearly complete fuselage, wing center section (his design), incomplete wing spars, numerous wing ribs, and many other sub-assemblies.  I have many engine parts for a Continental 85.  There are work benches for jigging up and building the wing spars.  Some of  the parts have been damaged while in storage but I believe are repairable.

If anyone in one of your chapters is interested in taking this on, I will be glad to give it to them.  I really want someone that is seriously interested in completing the airplane.  I think my only stipulation would be to see the completed airplane and if it has completed its test period, to get a flight in it.

The model is Piel Emeraude (Emerald) CP-301.  The plans serial number is 1004.  The plans were purchased around 1959 or 1960 by my father.  That makes the start date about 60 years ago.  It is not a kit.  One has to purchase or otherwise obtain wood (aircraft grade sitka spruce).  There are some old solid spars that can be cut for making wing ribs. I also have some very thin aircraft plywood for this project   Other parts have to be fabricated from materials. Part of the landing gear shock struts are already made.  The aircraft is built in metric measurements (mm, cm, meters) for the airframe.  The airplane without covering looks like those balsa stick truss model airplanes.