Pancakes and Young Eagles – The great weather afforded an opportunity for us to fly 7 more Young Eagles while everyone enjoyed pancakes, sausage, coffee, and camaraderie.

Our official meeting kicked off at 10:00 am.  Visitors and new members included

Safety Minute – Dick Keyt related an emergency that occurred in Reno this year, in part because the airplane had a glass panel, dual electronic ignitions, and failed or inadequate battery backups.  When the main battery died, everything went dark and things got quiet.  Think about your electrical power backups under worse-case failure scenarios.  Also, you Bonanza owners need to be aware of an important AD wrt rudder cables affecting many models.

Projects – Not exactly a project, but it may be something for your project.  If you have any interest in a Trio Autopilot, speak to Kenny Miller.  He is a dealer and can get you a deal!  Greg Walker has completed his RV-8A including airworthiness sign-off by Mel Asbury.  Greg will be making his first flight out of Granbury very soon after he addresses a high engine idle issue.  Doug Greene started his new RV-14 project about 2 weeks ago and is getting riveting help from Jacob Ingersoll and Andrew.  Doug Crumrine just brought home a quick, quick-build RV-8.  That is, a nearly new RV-8 quick-build that somebody up in Massachusetts decided they no longer wanted after putting about 70 hours on it.  He does have to get the thing painted himself!  Lawrence Ryan has just received all the kits and started on his new Zenith 750 Cruiser project.  The Glider group met earlier in the week and are working on how they can structure a club and trying to determine feasibility to go forward.

Christmas Party – Konnie Sasser and Claudia Sutter report they have several reservations and it’s filling up fast.  Call right away if you want to get on the list. More info here.

Future Events – Remember we have the Christmas party instead of a meeting in December.  Our featured speaker for the January meeting will be John Jaeckle to talk about flying the B-58 Hustler.  And we expect to hear from our 2019 Academy Scholar, Michael Pavon, who wrote a wonderful letter that was published in Sport Aviation, October.  Also watch for updates on Mash Bash – a joint fundraiser being planned with our local VFD/EMS for this spring.

Secretary and Treasurer Reports – There are 143 current Regular members (up about 10 from last year) with 26 who did not renew in 2019.  Look for renewal emails to start arriving in late December and January.  Please use the link to renew via PayPal or bring cash or check to a meeting.  Nametags for new members prior to mid-September are available, and a new order will go in soon.  Year-to-date, Brazos Bunch Property, LLC (BBP) has about $27,000 income, $8,600 expenses, and $10,600 depreciation for net taxable income of about $7,600.  Cash on hand is about $22,300.  We should end the year with about $14,200 in cash after paying property taxes and the $6,000 loan back to the Chapter.  The Chapter currently owns about 24% of BBP (that is, $100,000 of $420,000 invested).  The Chapter currently has about $21,500 on hand not including the $6,000 owed by BBP by year-end.  We have been serving about 45 to 65 breakfasts at our monthly meetings.  We served 360 meals at the Fly-In.  Our members helped with meals and other things at both the Bonanza and Swift Fly-Ins, and these efforts resulted in $432 and $579 donations respectively.  Nice work by our volunteers!  The Silent Auction generated $3,878 (plus $500 more received today) in proceeds, and the Memorial Bricks gross receipts have been $790.

Pancake Breakfasts – Tom Thibault has prepared a signup board and asks that everyone consider helping out when they can.  Preparations start at 7:30 am.  We’ve leaned heavily on a few folks (Deanna Thibault, Keith Brown, Toby Pechanec, Sue Cole, Kris Jaeckle, Steve Bloomquist, Dave Smith, Rhonda Smith, Jared Latimer, …, and others I’ve missed!) and are sure they would much appreciate some additional help when you’re able.  These regular breakfasts let everyone get to know each other better and are proving to be an enjoyable way to interact and welcome new guests and members as we kick things off each month.

Hangar Improvements – At their last meeting in October, Officers and Directors kicked around the idea of hangar improvements including a hot water heater, installing donated appliances, and reconfiguring the toilet.  Doug Crumrine mentioned his wife and daughter might be able to help with design and planning, and Tom Thibault has spoken w/ Don McDonald about helping out as well.  Ideas and costs will be outlined and brought back to the membership for consideration before any significant work is done.

Officer and Director Election – Thank you Keith Brown, Curt Farley, and Rusty Stricker for serving as election officials.  As noted in a separate post, the unopposed slate was elected unanimously by the quorum of members present.  Please offer your gratitude and support for new incoming officers AnnElise Bennett (VP) and Bill Eslick (Treas).  Dick Keyt (Pres) and Kliff Black (Sec) both agreed to serve one more term.  We increased our directors from 5 to 6 and seated Jared Latimer, Doug Crumrine, Tom Woodward, Tom Thibault, Dave Smith, and Ed Askins.  Per our bylaws, the leadership transition will take place in December and our new team will officially start in January.

JUSTIN SHARED HIS INSPIRING STORY about how he made it to Reno and won the 2018 Formula One race.  At the age of 22, Justin lost the use of his legs while racing motorcycles.  He said the 150 mph crash might not have been that bad (OK – I’ll take his word for it!), except the motorcycle followed and pounced on him a several times as he was sliding. 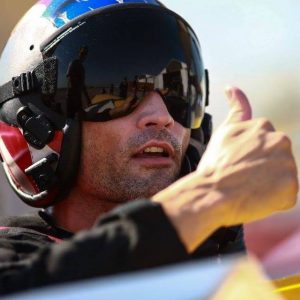 Justin loves to compete and was out testing his mettle in a hand-cycle race just six months later.  Within a few short years, he made himself into a world-class wheelchair racer and triathlete and won a coveted spot on the U.S. Triathlon team.  When it comes to challenges and adversity, Justin’s attitude is, “OK, bring it.”

Somewhere along the way, Justin learned he could fly an airplane using hand-controls.  Since he still loved motorsports, this naturally led to the idea if racing at Reno.  Why not?  When a friend offered Justin the use of his Formula One racer, that pretty much sealed the deal.

Of course, Justin had already started working on his own airplane in 2015 even before he had ever touched an F1 racer.  His first race (after air-racing school and certification) was in the borrowed airplane in 2016.  By the way, he had been picked to go to Rio for the 2016 Olympics but gave up the opportunity to compete on the ground for one to compete in the air.

Justin designed his own hand-controls, and with the help of the borrowed airplane owner, got them installed.  His first flight in an F1 racer was a short one.  The engine quit just after lifting off at Midland, TX.  Fortunately, he had plenty of room to make his first engine-out landing on the remaining runway.  The problem was traced to a vapor-lock and explains why there is an electric boost pump on his airplane. 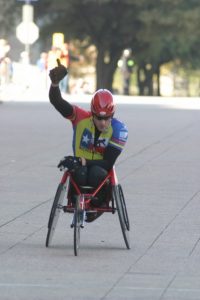 Justin’s airplane is based on a 1990’s plans-built design called the SR-1 Snoshoo.  About 20 sets of plans are thought to have been sold, and one airplane is known to have been completed and flown prior to Justin’s highly modified airplane.  With the help of Professor Paulo Iscolde from Brazil (known for his work on the record setting Anequim), Justin designed and built a unique carbon fiber, 66 sq-ft, 22 ft span wing that weighs in at only 104 pounds.  The empennage construction and surfaces are all redesigned as well.

Craig Catto (Catto Props) contributed shop space, materials, machining, expertise and countless hours to help design, construct, and test the unique and very fast Limitless Air Racing airplane that propelled Justin to victory in its very first heat race in 2018.  The paint had been dry for about 2 days, and they had flown only 2 practice laps at Reno before qualifying 3rd and eventually winning the 2018 F1 championship.

Justin had missed the 2017 season entirely.  Thinking that Limitless (the name says it all) would be ready, he had returned the loaner ride.  Limitless first flew in early 2018, and the team spent the months leading up to Reno testing and dialing her in for speed.  Most test flights were without fairings.  There are no provisions for trim, except to shim flying surfaces.

As Justin likes to put it, he must hand-fly the airplane from startup to shut down.  The center stick is conventional and operates the ailerons and elevator.  It includes a hand-brake lever like those found on a race bicycle to operate the right wheel brake.  The left hand operates the rudder with a fore/aft stick.  It is outfitted with a twist-grip throttle (like a motorcycle), a push-pull Vernier mixture control that extends out the top, and a left-wheel hand-brake.  There’s just no way to scratch an itch. 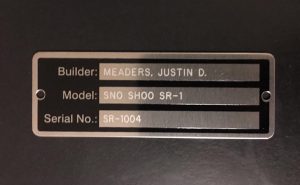 The airplane has no flaps and touches down at about 90 mph.  From a standing start on the ground in rows of 3 each, the fastest F1 racers average about 240 mph for one start plus 8 laps over a 3.19 mile oval course.  The course is tight for airplanes this fast, and they typically bank to 3 plus G turns, and sometimes register about 6 Gs.  Even with these turns scrubbing off speed, the F1s reach about 280 mph in the straightaways.  All on a Continental O-200 engine that is allowed very little modification.  In a Cessna 150, these engines were designed to produce 100 hp.  In racing trim – balanced, ported, and revved to 4500 rpm – they make an estimated 180 hp on standard 100LL fuel.  When asked about TBO, Justin said it’s measured in minutes rather than hours.  After one event like Reno with practice, qualifying, and 3 races, the engine is pretty much spent.

Limitless is outfitted with a 46 inch, 3-blade, fixed-pitch custom Catto prop (or course) that has about a 68 inch pitch.  Since F1 uses a standing start, there are a lot of tradeoffs to be made between takeoff acceleration and top speed.  His is the only gold class racer with a Catto prop, but others are expressing an interest after seeing what Limitless can do.  The airplane weighs in at about 550 pounds.  It could easily be about 520 pounds, but Justin has elected to have an onboard starter, primary battery, and backup battery.  It carries 6 gallons of fuel.

Pretty much blessed with most everything going right in 2018, the team had their fair share of problems in 2019.  An oil cooler leak took quite some time to find.  They were able to make a field repair and get to the heat race, but the leak opened back up and dumped most of their oil during the race.  Nevertheless, they won both of their heat races.

A fellow competitor (Steve Senegal, Endeavor) learned about their plight and offered up the part needed from an airplane sitting in California.  He not only did this for one of the very few teams that could beat him, but even had someone from his team fly one of Justin’s mechanics down to get it!  These guys obviously work and compete as hard as they can, but they only want to win out on the course and not because someone else has a problem.  There’s another great lesson about life in there somewhere.

Steve’s generosity meant he would be relegated 3rd place in the championship race behind Justin who took second.  It appears the low oil heat race may have hurt the engine which was not making full power on one cylinder.  A post-race inspection revealed a broken oil ring.

When asked about going faster next year, Justin said that he and the team feel the most to be gained might be in the prop.  They will certainly work on aerodynamics and power (Justin is the engine builder), but the prop is first on the list.  Craig Catto already has 3 new iterations he wants them to test.

Thank you Justin for inspiring us all with your story about living life well.