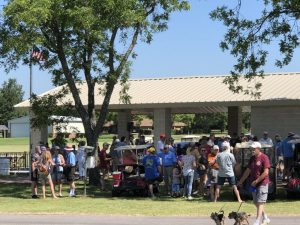 What a great day! Sid Tucker said it best when he wrote, “Thanks to all of you… for a great event yesterday. I know a lot of hard work and planning went into this event. It just shows what a great group of folks who are willing to volunteer and build friendships can do.”

After months of Saturday morning disappointments, we finally got the weather we were all hoping for.  Everybody really enjoyed the shade and comfort of the renovated Planeview Park pavilion and restrooms. Our cooks and servers did a fantastic job. The numbers are coming in, and it looks like we served about 135 pulled-pork sandwiches and collected some very nice donations to help offset expenses and make the lunch effort all worthwhile.  I don’t know if they have sold out, but Dave and Rhonda were putting leftover pork into baggies and letting it go for a reasonable donation to the Chapter.  I know I got my 20 bucks in right away!

Karen reports we flew 10 Young Eagles (at least 3 had never been up in an airplane of any kind before) bringing our official count to 31 for the year so far. We also have a couple more YE’s to fly today or tomorrow if the weather will give us a break. 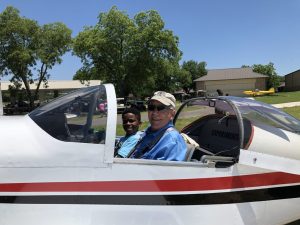 I know of 3 who said they are planning to learn to fly, and one who indicated he will be starting a college aviation career program this fall.  It sounded like he is trying to decide between Embry Riddle or OSU. 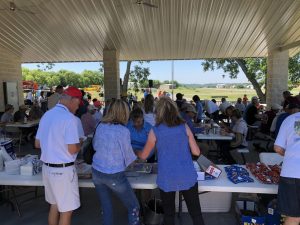 In addition, various pilots flew at least 14 or 15 adults and in some cases their children who could not qualify for the YE program.  Dick Keyt flew 6 in the Ryan, which is always a highly sought after ride.  Most of the adults qualified for Eagle Flights, but in many cases, pilots just offered a ride to anyone standing around looking dolefully at an airplane while glancing skyward.

Karen and Doug Gomez took a boatload of great pictures you can access and download here.  We will add them to our Gallery in the near future.  These photos are copyrighted but do not include watermarks, so please be sure to give credit in writing for any Fire Eyez Photography images you publish or otherwise use.  I also have a few photos from others.  Send me what you have, and I will add them to our Gallery.

Another big thank you to all the Association volunteer leaders, Management, and the EAA Chapter 983 leaders and volunteers who literally worked for years to finally bring the Planeview Park renovation project to completion. We want to especially thank the private donors who contributed something north of $80,000 to EAA Chapter 983 which was used to augment $40,000 authorized by the PPOA Board for the renovation and other improvements.  This project would never have happened without generous private funding support. 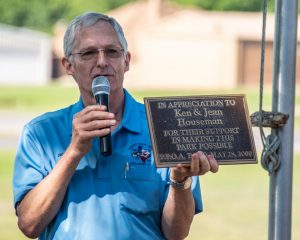 Did you know that Planeview Park was originally established when Ken and Jean Houseman donated funds to help remove the abandoned fire station (which had become a serious eyesore) and make improvements? The Houseman’s are recognized with a commemorative plaque that is being relocated to a wall of the renovated structure. And by the way, our own Joe Sasser is credited with the naming of Planeview Park as part of a contest.

Recently, I have heard rumors about the possibility of renaming The Landings Airport. Who’s up for another contest?