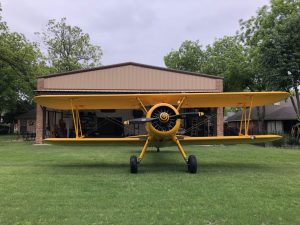 No way that thing is going into that hangar!

Jason Hutchison is the proud new owner of a beautiful 300 hp Stearman.  He said that he has already managed one ground loop due to a tailwheel cable that stuck.  Landings in the grass had been uneventful, but on pavement with the higher tailwheel traction, he ran out of rudder authority before coming to a complete stop.  Inspection found the tailwheel cable problem.  There was no damage, but replacing the bad parts was a costly proposition.  Welcome to the joys of adopting a Stearman and bringing it into the family.

Several of us (Bob Moreau, Damon Berry, Jimmy Cash) were on hand for his arrival in Pecan Friday afternoon.  After watching an uneventful landing to the north in the grass, we were taking bets on whether the airplane would make it up the taxiway and fit into his hangar.  I for one thought Jason must have mis-measured, but I was wrong.  It easily cleared taxiway obstacles and then slid right into the hangar with no fuss at all.  Sounded really cool taxiing up, too.

Be on the lookout for Jason and Gwen cruising around the neighborhood and showing off their new baby.