Chip Mull rewarded us with a glimpse into the history of Vietnam and his personal experiences in 1969 and 70 flying the Bell Huey UH-1H “Huey”.  More on that below.

Dick Keyt called the meeting to order and introduced several guests as well as new and returning members.  Gary Bassham from Millsap has a Zodiac project he is hoping to complete.  Justis Lindsey is a student from Mansfield, and is brand new to aviation.  Justis thought he wanted to become a pilot.  After his first rides courtesy of Dick Keyt in the Ryan and Ed Askins in the RV-8, he’s hooked.  All I can say is, DUH!  Who wouldn’t be with first rides like these?  Justis brought his dad, Paul, to the meeting.

Many of you may know Bill Bohlke.  Bill has spent most of his career flying for American Airlines and working the family business based in St Croix (Bohlke International Airways), but he is planning to be here in Pecan a lot more going forward.  Bill related a very brief account of the only open water ditching of an air carrier jet. Bill was a pilot in the May 1970 rescue effort for the downed DC-9.  For the full story, take a look at the book, 35 Miles from Shore: The Ditching and Rescue of ALM Flight 980, available from Amazon.  The accident chain is both chilling and instructive.

Safety – Dick related the story of a gear a gear up landing he made in the Polen Special at an airshow many years ago.  The gear was stuck with one main up and the other main and tail gear down.  Needless to say, there was a LOT of video of the event.  The lesson:  It’s important to have an evacuation plan practiced and memorized.  It took him 26 seconds to exit the airplane after it stopped, during which time he first removed his helmet (as always for normal egress), realized that was a bit ridiculous, then re-donned the helmet before finally unstrapping and getting out.  Think about emergency evacuation, and get a good canopy breaker tool if there’s any chance your aircraft might wind up in a position the canopy cannot be opened.  A sharp point, heavy impact tool like this one used by the military is recommended.  Martin Sutter also suggest carrying Nomex gloves (helps w/ hot and sharp stuff) and swimmers goggles (in case of bird strike or canopy opening in flight).

Projects – Lawrence Ryan discussed his Corvair powered CH 750 progress.  Greg Walker has wings installed on his RV-8A.  It finally looks like an airplane!  Pat Hoyt has just started work on a plans built Whitman Tailwind.  That takes gumption!  And Tom Thibault reported he had a successful first flight (I’m here, aren’t I?)  in his repaired Lancair.  The only squawk was a prop overspeed problem that could be controlled but needs work.

Planeview Park Pavilion Dedication – The Chapter is planning to host a community-wide event for our next meeting.  A lunch cookout is being planned.  Please help get the word out.

IAC 24 – Doug Greene reported this local area chapter of the International Aerobatic Club hosted their annual event at Breckenridge last week.  They had very good attendance with 2 Primary, 15 Sportsman, 10 Intermediate, and 2 Advanced category entrants.  DR Bales took 5th and Doug 6th in the Sportsman category, and DR’s protege, Eric, took first in Intermediate.  Doug noted there were several RV’s in the competition and seemed to hint that a few more of us might consider jumping into the fray.  Inverted oil and fuel systems are not needed at all for the Primary maneuvers.

Mash Bash Joint Fundraiser with the EMS Auxiliary – Well, we didn’t get very many volunteers to sign up.  Please think about it and help out if you possibly can.  This is a great opportunity for our Chapter to showcase the Airpark and build relationships with the broader Pecan Community.  Community outreach is core to our Chapter purpose and EAA Mission.  The event is scheduled for Saturday, 2 November.

Pancake Volunteers – Tom Thibault has stepped up to coordinate our Pancake Breakfasts.  Deana has (as always) jumped in with both feet to help out.  Please let Tom know if you can help with snacks, coffee, pancake mixing and cooking, sausage grilling, or anything else to ensure we have plenty of folks having plenty of fun at all of our meetings and events.  We’re trying to not overdo it (too late!), but feel that having a breakfast or lunch in conjunction with our meetings is a great way to socialize, create an enjoyable atmosphere, and encourage attendance.

Financial Report – A few folks have asked about the arrangement the Chapter has to buy our hangar property.  The property is owned by Brazos Bunch Property, LLC (BBP) which has 4 members including the Chapter which currently owns 23.8% interest in BBP.  We have a long-term plan for the Chapter to wind up owning 100%.  The Chapter initially invested $100,000 in BBP, and will need invest another $300,000 over the next 20 years or so (about $15,000 per year) to own the property outright.  There should be some net rental income that will help now that we’ve completed the various capital improvement projects to get the property in good shape.  And as the Chapter buys more interest in BBP, more of the net rental income will flow back to the Chapter.  Please take a look at this presentation for more.  Contact Kliff Black if you have any questions.

Ed Askins was out of town this week, but he related the Chapter financial status to Kliff.  We have about $15,000 in the bank, of which about $1,800 will be needed to pay for our Air Academy Scholar to attend Oshkosh.  Ed coordinated fundraising and the irrigation and landscape work to finish off things adjacent the new taxiway.  Les Staples contributed $1,500 and 8 other donors another $1,000 to help pay for this project.  If you would like to contribute, please let Ed know.  We had hoped PPOA would be able to do this work, but they were too constrained (both budget and manpower) and unable to get it done in a timely manner.  With all the rain and dirt washing off, we decided to go forward on our own.

The last two Pancake Breakfasts grossed over $350 each, and the Don Saint Raffle typically brings about $35 to $50 to help offset expenses for snacks. 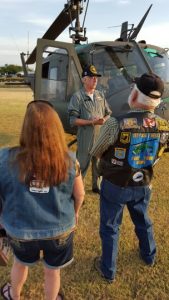 Presentation – I never ceased to be awed and inspired by some of the folks we have living right here in Pecan.  Chip Mull flew for a relatively clandestine, all volunteer insertion/extraction unit in Vietnam.  He routinely flew from the left rather than the right side, since it afforded better visibility below with less instrument panel in the way.  There was some armor plating around and below the seat, but not much, and essentially nothing forward.  We’ve all seen photos of guys like Chip wearing sidearms on a waist belt.  That wasn’t to be “cool” but was because a shoulder holster just didn’t work with the flak jacket.

Speaking of flak, Chip and unit crew once attended a briefing where they were told the enemy had no radar guided antiaircraft capability.  Not true.  He and others routinely listened on an FM radio to tell when they were being painted and needed to immediately initiate evasive maneuvers that included getting even lower and making a lot of random turns.  Else, the flak jackets would soon be tested.  It was routine to fly about 1600 ft above the ground, and that was considered good enough to avoid most small arms fire.  Hmm.  The fixed wing pilots considered anything below about 4,500 ft to be too low for small arms!

About half the missions were HOT – that is, enemy fire was expected.  In the areas Chip’s unit flew, they seldom had a usable landing zone for extractions. 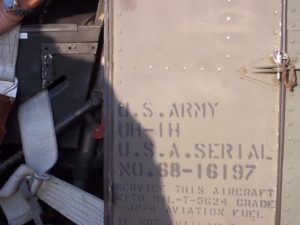 And the Huey’s were not equipped with a winch.  So McGuire rigs were the norm with personnel often riding the entire trip suspended beneath the helicopter.  They might descend below the jungle canopy for a pick up, and then had to be careful to climb straight up to get the rig clear before moving away.

A few years ago, Chip was reunited with one of the very same mounts he flew in Vietnam.  Airframe 68-16197 has been completely restored and now lives in Argyle, Texas.  What are the odds!?

F&M Enterprises Polyfiber – Chip’s business these days is Stits Polyfiber Paint and Fabric products.  No matter the system, there are 3 things that must be done after the fabric is installed:  1) fill the weave; 2) apply UV protection; and 3) apply the topcoat.  The basic Stits Polyfiber system uses polyester fabric and one-part poly-based filler and paint.  Clean up, or removal for applying a patch/repair, is with MEK.  The polyester fabric is shrunk with heat rather than application of dope. In fact, classic fabric dope should not be used on a polyester fabric.  The Stits system also includes a 2-part paint that may be used instead of the one-part, but repairs are difficult to affect, since the 2-part paint must be sanded off to the UV protection layer before MEK can then be used to remove the remaining layers.

A typical application includes 2 coats of the filler, 4 coats of the UV protection layer (silver pigment), and 2 final topcoats.  The paint systems can be used on metal or other surfaces with an epoxy primer.  And they offer filler products that can be used on fiberglass, aluminum and other substrates.